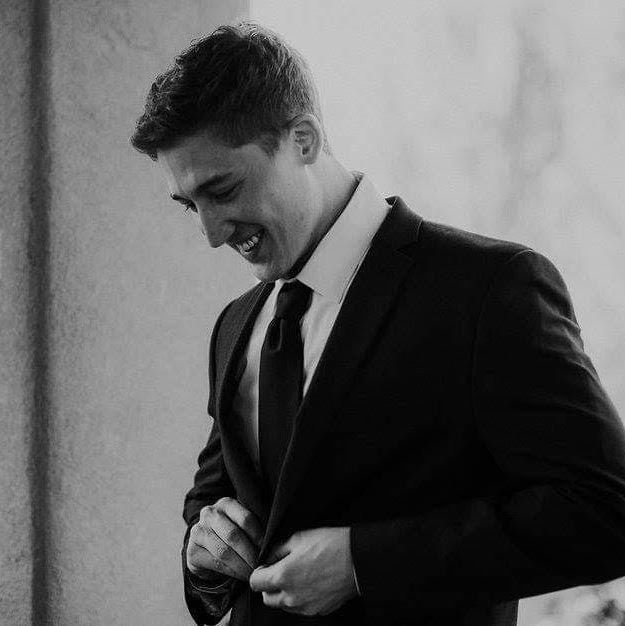 Can an Online Class Change the Course of Your Life? Ask Robbie Kujath about Design Bootcamp.

If you've ever felt down on your luck, you can probably relate to the story of Robbie Kujath: a School of Motion alum and the creator of one of our favorite motion design projects of 2019, who now says enrolling in our Design Bootcamp course altered the trajectory of his professional and personal life. Today, Robbie Kujath is a successful MoGraph designer with a portfolio featuring animations for the National Football League. Two years ago, he was merely a football fan with a bachelor's degree.

Tell us a little about yourself!

I’m a motion designer in Albuquerque, New Mexico. I’ve got a beautiful, supportive wife named Mikayla and a couple of dogs: Osweiler, or Wiley for short, and Kaiya.

I’ve lived in Albuquerque for the majority of my life, but I moved away for a short stint to work with Arizona State University and the Los Angeles Rams before returning to take a full-time, remote position at STN Digital, a San Diego-based social media marketing agency focused on sports and entertainment, with clients including the NBA, NCAA, UFC, Team USA, TBS, and FX.

My passion for sports — and football, in particular — led me into the creative world. I’m told that my first word was “touchdown.” I grew up going to Denver Broncos game, and I vividly remember waiting for the Broncos to run out of the tunnel and watching the pre-game intro video.

The video was heavily CG; it featured a bronco running through the city of Denver, with highlights playing on the side. It gave me chills every single time — and I can trace my love of sports media and design back to that video.

How did you turn your dream of becoming a Motion Designer into a reality?

I never really knew I wanted to be a motion designer until I was hired as one in 2017... and I was incredibly confused about my career until that point.

I enrolled at the University of New Mexico, or UNM, in 2011. I knew I had a passion for sports, but had no idea what to choose as a major; from August 2011 through May 2014, I tried out four: athletic training, exercise science, nutrition, and physical education. Unfortunately, none of them really clicked.

In 2012 I was hired by a local church as a part-time assistant to the associate youth pastor — kind of like Dwight Schrute’s role on The Office, but in church terms. At the Church, my duties varied from running errands at Walmart and Sam’s Club to creating really poor-quality graphics for youth services. At the same time, I started to create highlight videos for my little brother’s football team at La Cueva High School.

In 2014, I decided to ditch my university scholarship and switch to a local community college to pursue an associate’s degree in digital media. It may not have made much practical sense, but I was starting to realize that I had a passion for creating stuff. I finished that degree and then returned to UNM to finish my bachelor’s, since I had so many credit hours. In December 2016 I finally graduated from UNM with a bachelor's degree in liberal arts.

At this point, I'd already been hired by the church in a full-time capacity as more of a creative producer for youth services, and I was using After Effects to create interactive kids games and design video intro bumpers for the church's different series. This experience — and all of the football highlight videos I was making — really gave me a basic understanding of After Effects and all of the Adobe programs. So, I decided to step down from my position at the church in 2017 and pursue a career in the sports industry.

How did School of Motion change your career trajectory?

In the first three months, I must've applied for at least 200 jobs — from video producer at a university to graphic designer at a grocery store — and, out of all of those applications, I received maybe five responses.

Needless to say, I started questioning my choice of career, and if I should have left my former position; I spent all of my time applying for positions, instead of building up my portfolio... Big mistake.

But that all changed when I saw an ad for Design Bootcamp. I took the course seriously, and really tried to absorb everything that Michael Fredrick taught. Design Bootcamp provided me with a base understanding of solid design, and taught me how to use that in relation to motion design.

Honestly, I learned more in Design Bootcamp than I did during my five and a half years of college...

After the course, I decided to start building up my portfolio with sports design pieces, implementing what I'd learned in Design Bootcamp. And that's when I started getting contacted by sports programs and teams about employment.

I was blown away: two months prior, I couldn’t buy an interview; now, I was getting interviewed at least once a week — and job offers were coming in. I ended up accepting a position with Arizona State and, shortly after, was offered a dream job as Motion Designer for the Los Angeles Rams.

Can you expand on your time in Design Bootcamp?

When you’re a young designer, you see things you want to create but you simply don’t know how. There’s a disconnect that is so hard to push past.

Between the instructor's lessons and the TA’s feedback, I was able to see things in a new way. I no longer just threw elements onto a blank canvas and hoped that a solid design would appear — I learned actual steps to take in order to create good designs.

My biggest challenge during the course was creating storyboards that fit together seamlessly.

Each week in the course, you create at least three designed storyboards off each client prompt. Initially, I'd spend so much time and creative energy trying to come up with the first storyboard design, and then get so frustrated when I had to translate that into another two to five additional storyboards. But, by the end of the course, I was pretty confident in the work I was submitting, and the storyboards actually felt like full packages.

You can be a keyframe master or a wizard with the curve editor, but if you can’t design well it won’t resonate with or appeal to the majority of people.

To this day, a lot of my motion work doesn’t have crazy, complicated motion; it’s based on solid design composition — with added motion. Design is the foundation of good motion design, and I’m so thankful for School of Motion and Michael Fredrick for helping me understand that.

What are you focused on currently?

Well, I took School of Motion's Cinema 4D Basecamp last year, and I found that what I learned in Design Bootcamp fit in beautifully. I was able to use some of the design principles from Bootcamp to inform my decisions on 3D designs and projects I was working on with EJ Hassenfratz, the instructor of Basecamp. And I learned so much.

Cinema 4D Basecamp gave me a better understanding of all of the base elements of Cinema 4D, and I have zero doubt that it's going to help my career.

Now, I'm working on figuring out texturing and lighting in C4D, as well as experimenting with different renderers. Plus, I'm also trying to get better at hand-drawn animation — and I'm definitely planning on taking School of Motion’s new Illustration for Motion course.

Any words of advice for aspiring or growing Mograph practitioners?

Work hard. Be consistent. And don’t give up just because you don’t understand something at first.

We’re lucky to be living in this digital age. If you want to figure out how to do something, all you have to do is take the time to do the research. You may spend an entire day researching, watching tutorials and reading random blogs, but it’s worth it if you learn something in the end.

Don’t be afraid to invest in yourself.

I know it’s always hard to spend money on courses, because you tell yourself you could be spending that money on something else — like a new computer, or more plug-ins. But there is nothing more valuable than knowledge that actually sticks with you, and the instructors at School of Motion are incredible.

If you want to grow your skills, but don’t know where to start, the number one thing I'd recommend is taking a School of Motion class.

It’s so important to learn the right way, so you don’t have to spend years in the future correcting things that you simply didn’t learn correctly from the get-go — and you'll be amazed at the your growth in just a few months with School of Motion.